This model was produced in three variations, all the features were the same, only the nameplate was different, from 1957 to 1960 the nameplate had this beautiful lettering either engraved or embossed, mine was manufactured in 1961 and has this black plate with straight Roman lettering.
I'm saying that mine was made in 1961 as wishful thinking, they were produced between 1961 and 1963.

These cameras were made by Ihagee, in Dresden, Germany.
They are the culmination of an extensive line of 35mm SLR cameras, a field where Ihagee was one of the pioneers, they started with the Kine Exakta in 1936 and continued its production until 1948.
After WWII, Dresden was in East Germany, under Soviet influence.
The models prospered with the early EXA models, then the V model, VX, Varex and finally the Varex IIa and IIb.
After that, they started cutting corners with models stripped of features like the VX500 and VX1000 ending with the EXA models, from which I have several and like them very much, but in a quite different league.

The camera is beautiful, perfectly build, a nice engineering project but an ergonomic nightmare.
I think that the factory closed when the word ergonomic became current.

Let's start with the shape: a trapezoid, maybe not the best gripping shape. Although I must confess it's beautiful
The controls: all the most important controls are located on the left of the camera, maybe it's a good thing for lefties, not my case.
Let's see film advance, shutter speed selection, for high speeds, film counter and film counter reset, release for film rewind and shutter release, this one not only it's in the left of the camera but also in the front.
On the right top, we have the shutter speed selector, for low speeds and self-timer, in the same knob, and a film reminder. 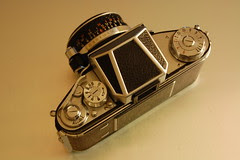 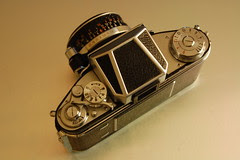 There is also a shutter release lock: 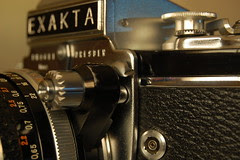 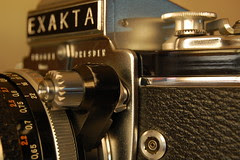 You can see it unlocked, on the left picture, and locked, on the right one.
It's a nice feature, not very practical with this kind of lenses, with the shutter release extension.

It features a very nice, hinged back: 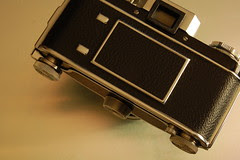 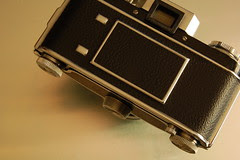 Here again, opening it's a tricky operation you must pull hard, or awfully hard, on that knob on the bottom left and then twist it, either way, to keep it unlocked.
It's unlocked, on the left picture and locked on the right one.
The right knob is the film rewind. First, you have to release the film with the button on top, then you must pull the rewind knob, so it comes off and then you turn it CW to rewind the film. 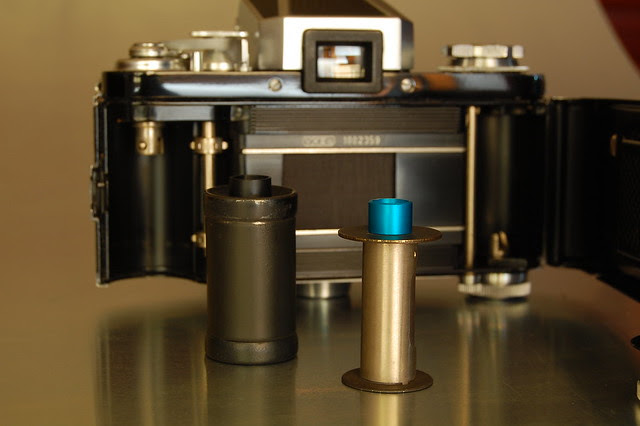 A nice feature is that you can use either a take-up spool or cartridge. 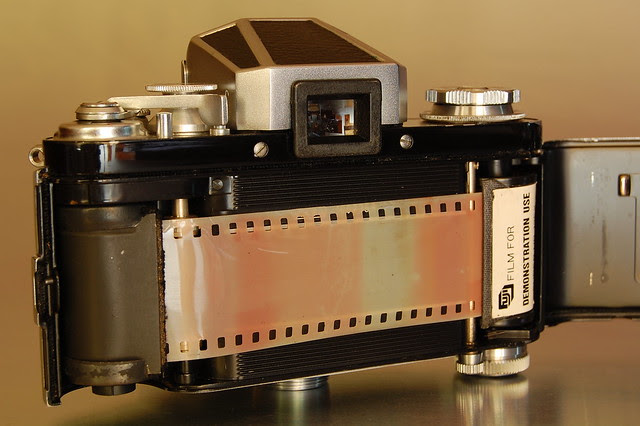 Using the take-up cartridge, you can perform a mid-roll change: 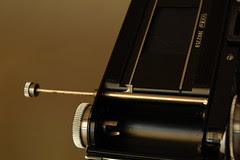 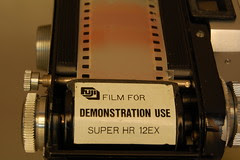 Unscrewing the small knob, near the rewind knob, we release a knife, used to cut the film. Clever gadget. 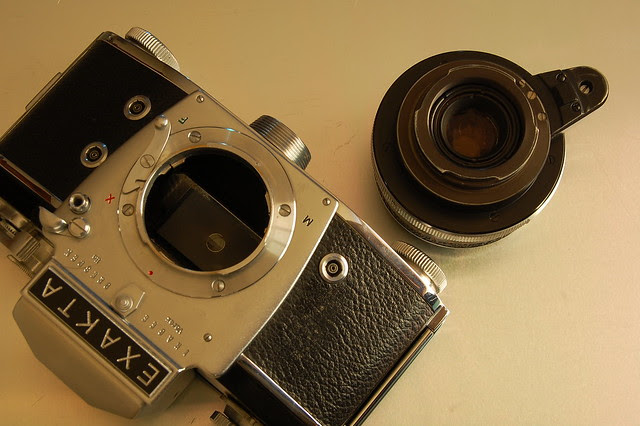 The lenses are interchangeable, using the Exakta mount, shared with early EXA cameras, Topcon adopted it too,  later models adopted the M42 screw mount.
Exakta never produced lenses for their cameras, many of the contemporary German lens makers did it for them, even Nippon Kogaku, later Nikon Corporation, made some lenses with its mount.

The viewfinders are interchangeable too. There's an array of them, from waist level finders to metered prism. 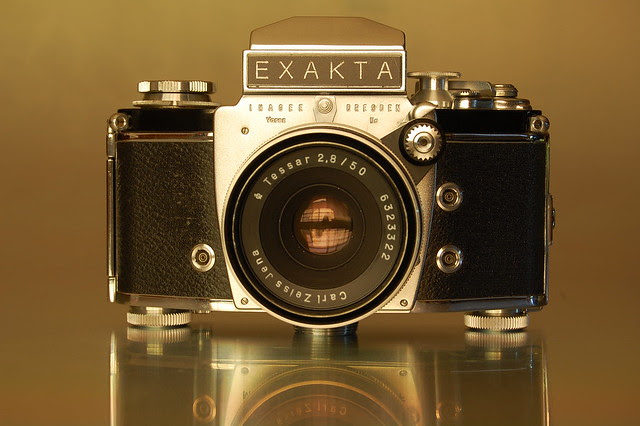 Did you notice the three flash connections, for slow bulbs, fast bulbs, and electronic flash?

Anyway, with all its quirks, this is one of the most beautiful cameras in my collection.

The lens that came with it is a wonderful Carl Zeiss Jena Tessar 50mm 1:2,8

As a shooter is quite competent, only the 1/1000 shutter speed is faltering, maybe with a good clean up, it revives.
I leave here some shots, so you can judge by yourself.